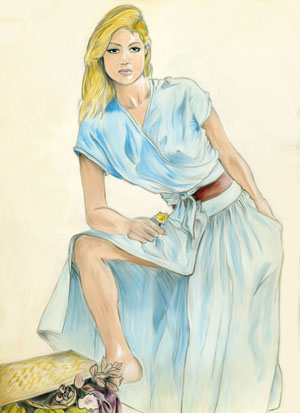 I’ve posted a painting that I made based upon an old colored pencil drawing. The general idea was to explore ways to create some art that I need right now without first having to learn a whole new skill set. So this was a bit of an experiment, to see if I could use my existing familiarity with colored pencil to create base images that would be imported into Corel Painter X for final rendering. I imagine I’ll eventually do everything from scratch in Painter X, but there’s still a certain appeal to feeling the paper beneath your fingers. So… we’ll see how things go in the future. But in the meantime, I think I have an existing process that will let me get on with things, at a minimum of fuss.

I haven’t decided whether or not I’ll do more of these. In a way, I’d like to re-do the four or five colored pencil drawings I have of women. Time has not been kind to any of them, and they don’t look nearly as good as they originally did.  So… this would be a way of preserving the images, while updating them to reflect modern techniques and capabilities. It’d also make me damned familiar with Painter X and it’s many tricks.

We’ll see. I don’t know how much work I’ll ever get done, art-wise. Seems like my art these days is mostly guerrilla art that I make when I sneak away from doing the other things that some folks think I should be doing. But if I never render up another of the colored pencil drawings as a painting, at least I’ve proven the concept. That’ll serve me well in the future, I think.