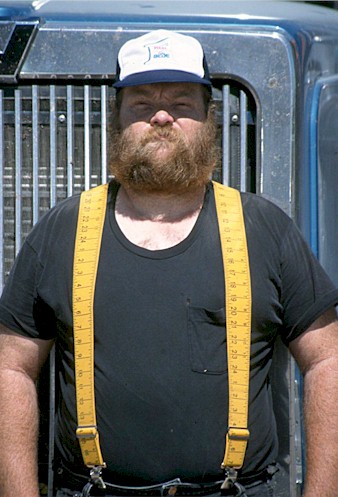 I just read an article about a bit of political grand-standing that has raised my ire a bit.  President Obama’s transportation secretary on Tuesday banned truckers and commercial bus drivers from sending and receiving text messages. My first thought was “you think the truckers are the fucking problem?” Holy crap. Get a grip, dude.
But, of course, this has nothing to do with reality. This feeds into the general ill-will that the public feels toward truck drivers. We all know that truckers are rolling death on the highway. Yeah, it couldn’t possibly be little Cindy Lou in her VW Beetle, bopping down through morning traffic at 80 miles an hour, while singing her favorite song and putting on make-up, that causes all those accidents. It couldn’t possibly be Chad, the yuppie commuter, who’s zipping into work with an open briefcase in the passenger seat and paperwork scattered all over his steering wheel and laying in his lap. It couldn’t possibly be Betty the soccer mom who’s careening down the road with an open book lying on her steering wheel, could it?
There’s a saying among truck drivers that pretty much sums this up. If you’re driving a truck that gets into an accident, about the only time they won’t find you at fault is if someone rear-ends you at a high rate of speed. And even then it won’t be for lack of trying. Truckers are generally regarded as uneducated rednecks until they hit somebody, and then they’re suddenly upgraded to highly trained professionals. So naturally, if there’s a problem on the nation’s highways, it has to be those damned truck drivers, doesn’t it?
Well, as someone who spent eight years out there on the road, I’d generally like to tell the rest of you to kiss my entire ass. Here’s an interesting fact for you. In a report released by AAA a few years back (which, oddly enough, I can’t seem to find now), it was found that in over 78% of accidents involving big trucks and automobiles which resulted in fatalities, it was the fault of the driver of the car, not the truck driver. AAA quietly released that report, and did nothing in the way of advertising it. After all, it reflected badly on their clientèle, the drivers of automobiles, not on truck drivers.
Truck drivers are used to this kind of bullshit. Rather than do something that would take some balls, and ban all cellphone use and texting in all vehicles, the transportation secretary has pulled a sleight-of-hand. By targeting only truck drivers, who the uninformed believe are the problem anyway, the government gets to score some easy political points while essentially doing nothing to address the real problem. Believe me, if you could teach Cindy Lou, Chad and Betty that they’re at least partially responsible for their own fates, not to mention the safety of the people around them, we’d all be much safer on the highways.
I’m not saying there aren’t asshole truck drivers out there. You’ve all had encounters with some asshole trucker who’s ridden your ass on the highway or did something else unsafe. What I contend is that in your prejudiced world view of truck drivers, you didn’t once notice the thousands of safe, courteous truck drivers that you pass every day out there on the highways without as much as a thought (except you have to get around them). When you think of truck drivers you think of that one asshole wouldn’t let you out onto the highway when you came careening down that on-ramp, not the dozens of others during your week that got over for you. I’m sorry, but from the perspective of someone who drove one of those big trucks for eight years, I have little sympathy for you. I learned from hard experience that while truck drivers make an easy target, automobile drivers are their own worst enemy. Truck drivers save thousand of lives every day by avoiding accidents that car drivers are never even aware of. I’d like you to think of that the next time you’re screaming down the highway drafting a truck while you search in your glove box for your cellphone charger. And while you’re at it, once that annoyed truck driver slows down and forces you to pass him so you don’t get the both of you in trouble, why don’t you pass him and flip him off to show your appreciation? I’m sure he already expects it.