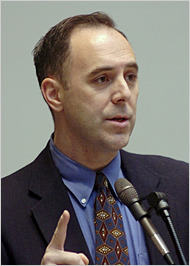 The thing that has always amazed me about those who choose to believe in Creationism instead of Evolution and the nutjobs who can look at a disappearing polar ice cap and say Global Warming is fiction, is that it takes very little to dismiss either one. Mostly because anyone who can look at the mountains of evidence that support both the Theory of Evolution and Global Warming and dismiss them outright can only do so out of Faith. They choose to not believe, because if they believed it would contradict their carefully constructed fantasy about the reality of the Universe. The Theory of Evolution contradicts the Creationism of The Bible. And if Man can directly influence and damage the planet, as with Global Warming, that is in defiance of God’s apparent intent. We couldn’t possibly damage the planet because God would never allow us to do so. Argument over.

The most annoying thing about theses people’s tactics is that they trot out a few hand-picked “experts” who loudly disagree with accepted science, a handful of nutjobs who are willing to go on record as lunatics, and then declare that there’s “no consensus”. 99% of scientists may agree that Global Warming is a significant problem facing the Earth, but because that insane 1% claims that the mountains of scientific evidence that supports the reality of Global Warming is bogus, the lunatic fringe insists that “both sides be represented”, as if each side has an equally valid argument.

Look, if your pants are on fire and 99 of the 100 people around you tell you so, isn’t it rather insane to listen to that 1 person who tells you that the flames are all a product of your imagination? Are you going to humor that person when he tells you that both sides of the argument over whether your pants are on fire should be represented to be fair?

Well, according to an article by Leslie Kaufman in the New York Times, there are those who insist that we do just that.

In Kentucky, a bill recently introduced in the Legislature would encourage teachers to discuss “the advantages and disadvantages of scientific theories,” including “evolution, the origins of life, global warming and human cloning.”

The bill, which has yet to be voted on, is patterned on even more aggressive efforts in other states to fuse such issues. In Louisiana, a law passed in 2008 says the state board of education may assist teachers in promoting “critical thinking” on all of those subjects.

Last year, the Texas Board of Education adopted language requiring that teachers present all sides of the evidence on evolution and global warming.

Oklahoma introduced a bill with similar goals in 2009, although it was not enacted.

The linkage of evolution and global warming is partly a legal strategy: courts have found that singling out evolution for criticism in public schools is a violation of the separation of church and state. By insisting that global warming also be debated, deniers of evolution can argue that they are simply championing academic freedom in general.